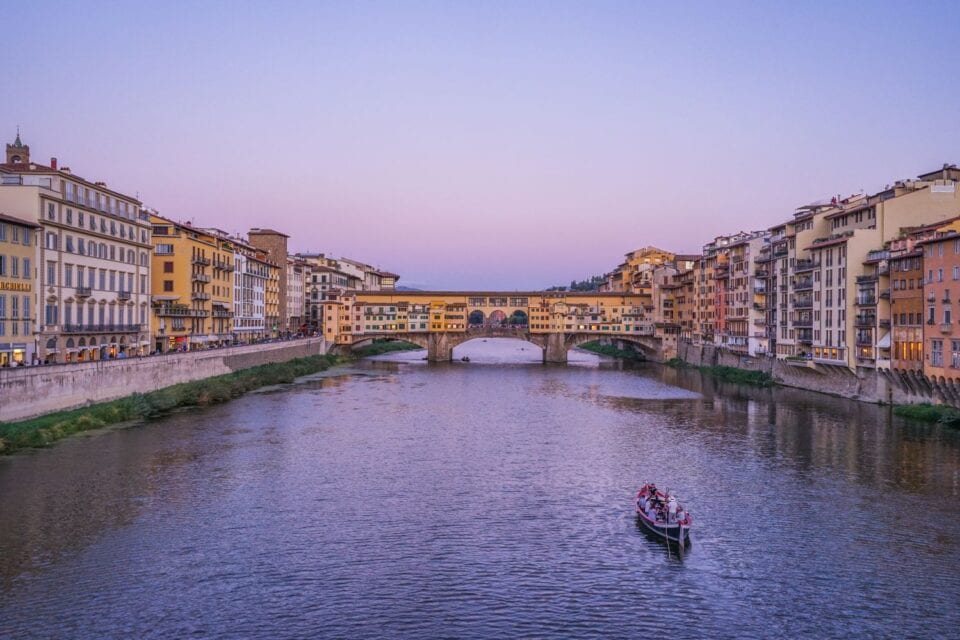 If you are traveling to the Tuscany region in Italy, you just cannot miss visiting Florence.

Florence, the capital of the Tuscany region, is considered one of the most attractive destinations in the world, and as soon as one has the opportunity to visit it, it’s not difficult to understand the reasons why. You may think it’s enough to say that its historic center has been declared as a World Heritage Site by UNESCO in 1982, but there is so much more to discover.

The city has one of the densest collections of arts per capita, as well as some of the most astonishing pieces of architecture in the world. Its monuments, churches, and buildings are well-known all over the world, including (but not limited to) Florence cathedral with its dome, Ponte Vecchio on the Arno river, and the Uffizi Gallery, hosting paintings by Leonardo da Vinci and Sandro Botticelli. The availability of Italy’s most famous artisans also provides a key ingredient to its recipe for attracting millions of tourists to its vicinity every year.

What to see in Florence

If you have an interest in architecture, you already know the significance and the stylistic appeal of the Cathedral of Santa Maria del Fiore and its adjacent Brunelleschi’s Dome. The dome happens to be the largest one built in brick and mortar in the world, even after 600 years from its completion; also the nearby bell tower (partly designed by Giotto) and the Baptistery buildings are also highlights of the city.

If you are passionate about art, you cannot miss the opportunity to visit the incredible Uffizi Gallery, with its enviable collection of Renaissance art and beyond: there, you can admire the masterpieces by the most famous Italian artists, such as Sandro Botticelli’s Birth of Venus and Spring, as well as paintings by Leonardo da Vinci, Raffaello, and Giotto. Nearby you can admire the church of San Lorenzo, which contains the Medici Chapel, the mausoleum of the Medici family, the most powerful family in Florence from the 15th to the 18th century; it was the huge bequest of the last member of the Medici family to constitute the original core of the Uffizi Gallery.

Walking across the city center, your eyes stumble upon beauty in every corner: a ten-minute walk is enough to see some of the main sights of Florence, such as the Palazzo Vecchio (also known as Palazzo Della Signoria, which is still home of the municipal government), the Piazza Della Signoria (where you can see some famous statues by Donatello, Cellini, and Giambologna), the Museum of Opera (containing many of the original works of art created for the Cathedral of Santa Maria del Fiore), and the Basilica di Santa Croce (which is the burial place of some of the most illustrious Italians, such as Michelangelo, Galileo, Machiavelli, the poet Foscolo, and the composer Rossini).

A very particular highlight of the city is the Palazzo Pitti with the Boboli Gardens adjoining the palace, which represents one of the first and most important examples of the so-called Italian garden (elaborately landscaped and with sculptures of various styles and periods), which was then taken as inspiration for many European courts.

Ready to start packing? These are the most common reasons why people loved visiting Florence:

This is the birthplace of the Renaissance area and you will love exploring through some old streets and visiting unique places, as well as museums. Your getaway to Florence does not have to be pricey either. You can settle at http://brunelleschihotelflorence.com/ since it is a beautiful hotel in the heart of Florence. Everything is quite close and accessible from this hotel.

2. Secrets and its history

If you loved the medieval area and you were always into hidden secrets, tiny little passages, as well as hidden treasure, Florence is your city! You can learn all about the Medici family with one private tour of the city. Learn about the Renaissance period, WWII, as well as Michelangelo himself with one of your tour guides.

There are loads of different cathedrals as well as statues that you can visit and admire. You may love the main cathedral of Santa Maria del Fiore a bit more than the rest since it is so grandiose and breathtaking. You will notice a unique combo of Gothic and Renaissance architecture throughout your journey.

As previously mentioned Florence is the capital of Tuscany. You can enjoy different green hills, vineyard, as well as delicious foods along the way. From Florence, you are in the perfect location since you can plan out little daily trips and enjoy bike rides, Vespa rents, and go through some of the prettiest green scenery.

Stack on loads of cheese and wine, as well as their traditional dishes!  You should browse and sneak into some of the prettiest and most-known restaurants, and enjoy top-notch foods. Do not go empty-handed either, and carry back some foods or beverages with you on your way home. You will want to snack on something delicious that will bring back the nostalgia, trust us.

New York and Milan are usually considered as the biggest and most famous fashion capitals of the world. However, you can find loads of hidden gems in Italy, as well as in Florence. With brands like Prada and Gucci (but on a sale) who wouldn’t want to give Florence a go?! If you are a true shopaholic and you’re someone who loves to bring back some souvenirs from your trips, you will love bringing back something extravagant from Italy!

Ready to have the time of your life?

What do you think of Italy and its history? Did you know all of these facts before we’ve shared them with you? Having some general knowledge is essential before you make your next trip. Know the basics about every city, and have ultimate fun! Aside from these top 6 reasons why you should visit Florence, do you have something else to add to the list? Let us and the readers know, we would love to have one more reason to visit this beautiful city.

8 Family-Friendly Activities To Do In Portsmouth – 2021 Guide

4 Ways to Prevent Mosquito Bites While on Vacation