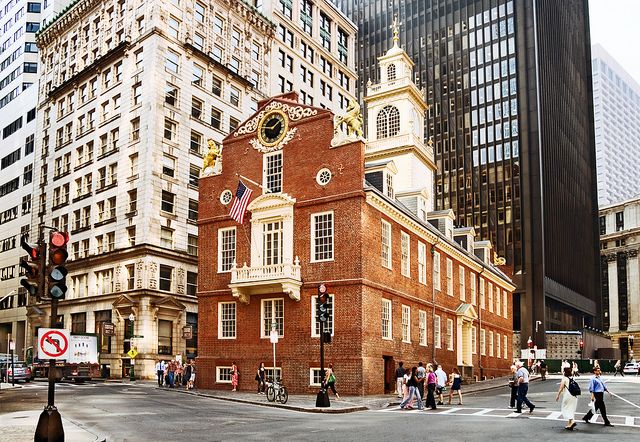 The Old State House, Boston’s oldest public building, was built in 1713 to house the offices of the royal colony of Massachusetts and both town and county government operations. It stands on the site of Boston’s first Town House of 1657/8 which burned in 1711. As the center of political life and thought in the colony, it has been called the most important public building in America prior to the signing of the Declaration of Independence.

In the 18th century, the first floor of the Old State House was used as a Merchant’s Exchange, while the basement was rented by John Hancock and others as warehouse space. Upstairs at the east end looking toward Long Wharf and the Harbor was the Council Chamber of the Royal Governors. Here in February 1761 James Otis argued eloquently against the Writs of Assistance, the British Crown’s policy of issuing general search warrants that specified neither charges nor individuals. He lost his case but inspired events that would lead to the Revolution fifteen years later. “Otis was a flame of fire,” wrote John Adams. “Then and there was the first scene of the first act of opposition to the arbitrary claims of Great Britain. Then and there the child Independence was born.” In 1879, a group of determined citizens formed the Boston Antiquarian Club to save the building from being moved to Chicago for the World’s Fair. Two years later, the group reorganized themselves as The Bostonian Society and began to operate a museum of Boston history in the Old State House. Today, the Old State House is located amid the skyscrapers of downtown Boston and is a museum of the city’s history. The Old State House, operated by The Bostonian Society and owned by the City of Boston, is a site within the Boston National Historical Park & one of the museums on the Freedom Trail. In front of the Old State House, a circle of cobblestones commemorates the Boston Massacre.

Everything You Need to Know About the U.S. Visa for People With Special Ability