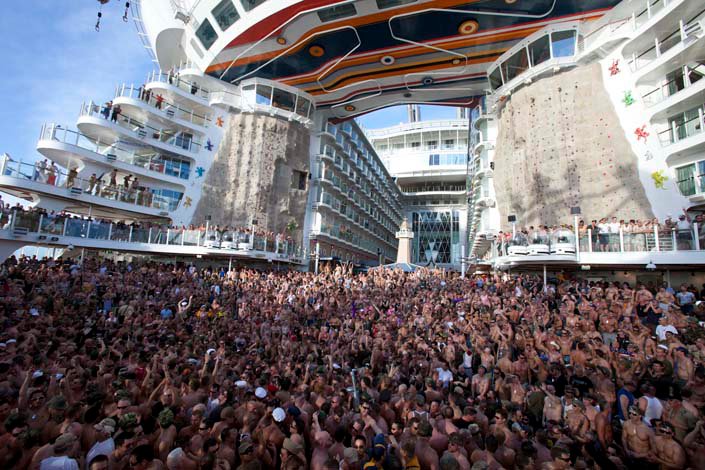 Ever watched the hit TV show Love Boat? No? Neither have I. Regardless we have all heard about it, and all heard the theme song at one time or another. This show is proof that a Cruise ship is more than just a vessel that carries you from a place to another, but a home that creates unforgettable bonds. Here are the top ten cruise ships. 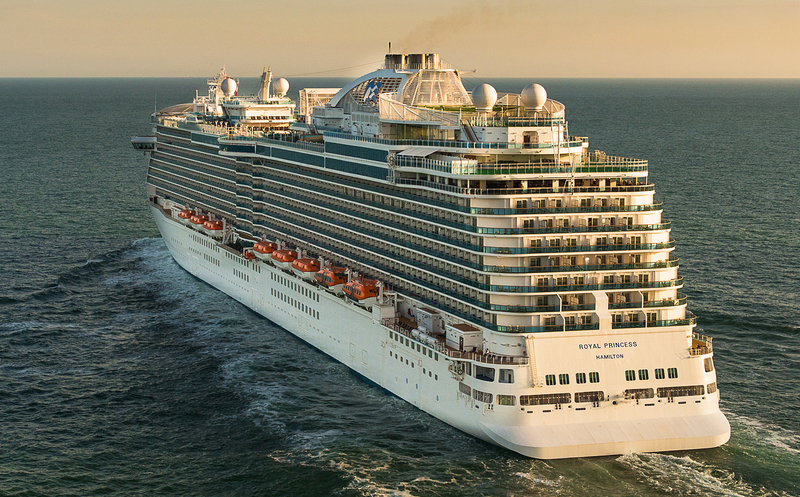 Born in Italy, this Princess is the youngest and largest cruise ship under the California-based Princess Cruises company. At 142,714 GT (Gross Tonnage), this massive ship is the smallest in our list.
Princess Cruises ships are rarely considered for their flare but more for providing a more traditional cruising experience. By 2013, this was slightly altered with the birth of its Royal Princess, changing its’ central hall into a buzzing city square like center, earning the name Piazza. This Piazza offers many entertainment factors such as a movie night under the stars, an outdoor sundeck for children and teenagers, a magical fountain, and a lot more for its 3,600 odd passengers. It also offers 16 new-fashioned restaurants which include Pizzerias, ice cream shops, a seafood bar, and pastry shops among others. While it is the largest of the bunch, the downside to its renovation is that the cabin sizes are smaller than its siblings’, but that is overlooked by the amount of entertainment it provides.

Queen Elizabeth II herself gave the largest Union Flag carrying ship its name, and rightly so. Other than carrying the Union flag, this 143,730 GT Goliath has the flag’s colors covering the entire ship, beautifully designed you can tell this is the pride of Britain without even seeing its sails. The interior of the ship is very luxurious, with the use of expensive wood, glass, and marble, it is made to show their 3,600+ passengers the value of their money. This ship also features many celebrities, from chefs to dancers to perform in their TV studio, most notably TV Chef James Martin. James has created “The Cookery Club” which is the first on-ship cooking school ever, and it features many other celebrity chefs throughout the course of the show. An elegant and very family-friendly ship, it deserves to be called the pride of Great Britain. 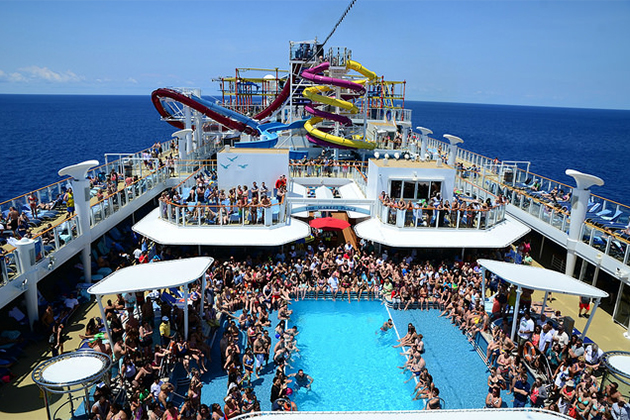 Don’t be confused by the name, the Norwegian Getaway is owned by the Norwegian Coastline, an American company, that was first made in Papenburg Germany, and is ported in Miami. At 145,655 GT, it might be a little lighter than its twin sister the Norwegian Breakaway, but it surely does not disappoint. The design itself gives off a very Miami-ish feeling, with the funky hull and the colorful theme, water-park like activities and a multitude of bars and restaurants. When we say multitude, we mean a whopping 28 restaurants and more than a dozen bars. The entertainment system dwarfs all that! With physical activities including wall climbing and zip-lining, a free fall, five multi-story water slides, and various others. It doesn’t stop there with singalongs, theatres, and the world-famous Illusionarium, it makes sure its 3900 passengers get an experience they will never forget. 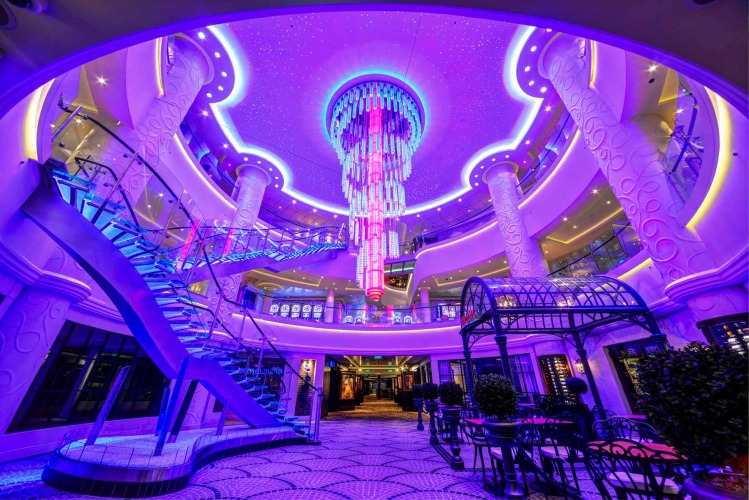 The older sister of the Norwegian Coastline weighing at 146,600 GT (Gross Tonnage), holding a bit over 4,000 passengers, it’s currently the 7th largest cruise ship. What makes this ship stand out is its entertainment system that makes you forget you’re at sea. Similar to a resort in Las Vegas, there is so much to do that you’d easily lose track of time. That being said, it is not for the passengers that want a more traditional, relaxing stay. On school holidays, it features activities meant for children and teens alike (targeting the teenage passengers more) but on normal days it’s focused more on solo and couples more. Although there isn’t a forced dress-code to follow, people usually dress formal on-board of the ship. That being said, some restaurants on-board require passengers to follow a certain dress code. 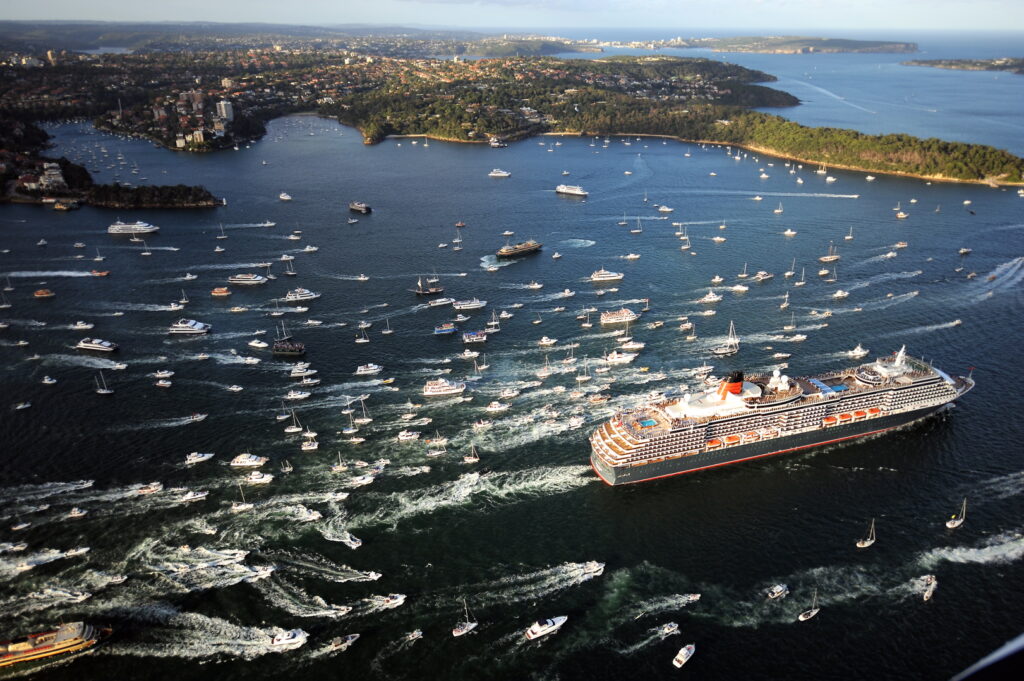 Named by Queen Elizabeth II herself after the legendary ship Queen Mary I, it’s the only transatlantic ship that transfers passengers and cargo from Southampton to New York. It’s also used for cruises and an annual world cruise. Known for being the largest ship at the time it was built in 2004 weighing 148,528 GT, that definitely is not the case now. This ship seems to have it all, 15 restaurants and bars, 5 swimming pools, a casino, a ballroom, even a nursery, but it’s most famous for having the first planetarium on the sea! Ever see those movies where the ideal and unique date would be taking the girl you like to a theater, laying down, planets and stars magically show up over you? Well, you can do that on this ship along with many other fun activities. This ship has carried many royalties in its day, especially in its 10 year anniversary in 2014, namely Prince Philip and his wife. 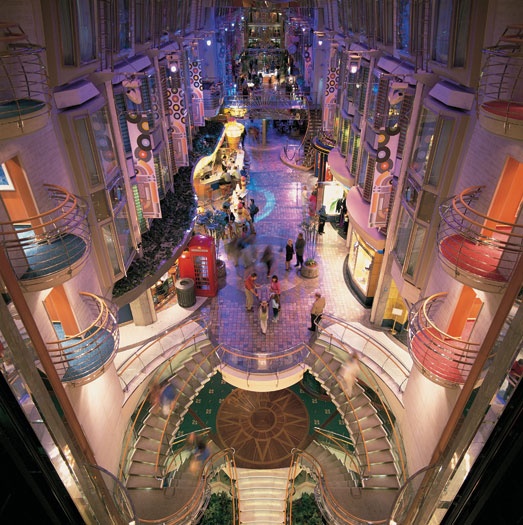 A three-way tie for the Freedom-class triplets (Freedom, Independence, and Liberty of the Seas). In 2006, the oldest sister was the largest ship in the world At 154,407 GT, they carry more than 4,300 passengers excluding crew members. All the Freedom-Class ships feature a state of the art water park, the H20 Zone. As expected from a water park, it’s fully enforced with all sorts of water sports including volleyball, basketball, etc. The Promenade is a “street” which features all sorts of shops and bars that you can enjoy your leisure. Alhambra Theatre seats about 1,200 passengers and a complete conference center. There’s also a whole ice rink that hosts professional ice skating shows and is also available for personal skating. All this and many more await you in the Freedom-class sisters.

It’s no surprise that Norwegian Coastline ships are featured so heavily on this list, and this is not even the last time it’s mentioned. Built-in Saint-Nazaire France, this mammoth weighs around 155,873 GT and holds more than 4,100 passengers. Built-in 2010 this ship wanted to stand out from the rest by building many never seen before facilities. The first ice bar at sea being the most prominent one, it was also the first ship to hold single studio cabins. Its’ bold innovations received various mixed reviews, but one thing was agreed on, it didn’t lack in the entertaining department.

The studio rooms built for single passengers had the most entertaining design on deck, one of the reasons it’s sold out so rapidly. A 681 seat theatre that provided live shows proved to be more intimate than the regular theatre system. It offers more than 20 different cuisines, which ensures a rich dining experience. Most of the negative comments came from its translucent bathrooms, hopefully, they learned their lesson there! 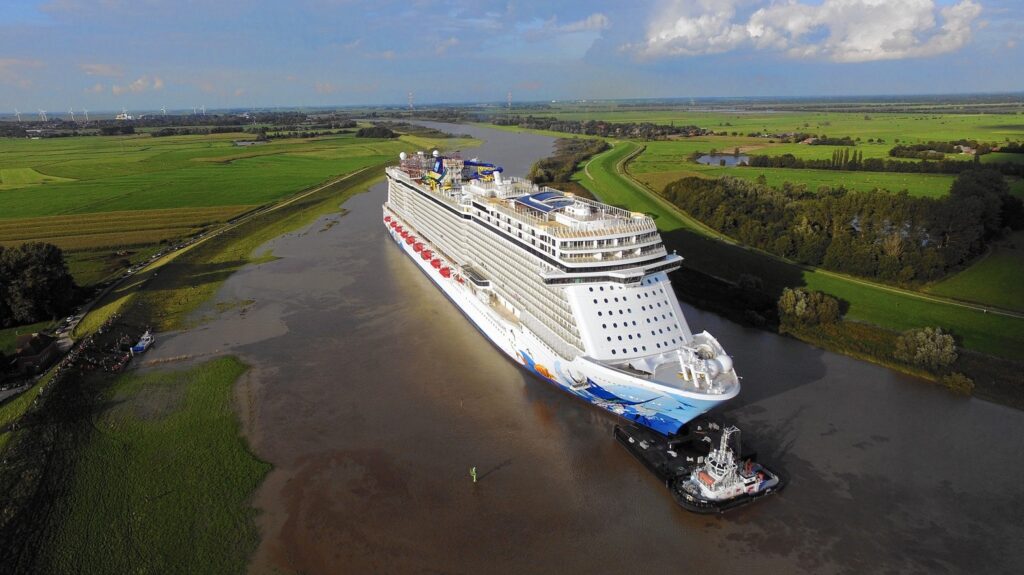 The youngest ship on our list is also the last Norwegian Coastline ship to make an appearance on the list. Making its debut in October 2015, this is the largest Norwegian Coastline ship, weighing 164,600 GT! This colossal ship features both single and family cabins, with 172 family balconies near the children’s facilities. While the cabins meant for their 4,248 passengers are world-class in terms of design and comfort, the private Haven is something else entirely. With 55 keycard accessible suites, a private restaurant, a pool with a retractable roof, two whirlpools, and a sauna, it makes sure to give the selective few a royal experience.678 Ocean Place is the 3 deck entertainment and dining area. Many cuisines from all over the world such as Le Bistro French, Moderno Churrascaria, La Cucina Italia, etc. to guarantee a diverse, dining experience. Casinos, bars, supper clubs featuring songs and movies from the ’80s, Broadway shows, an aqua park, and many many more activities make boredom a farfetched memory in this great Escape.

2. Anthem of the Seas 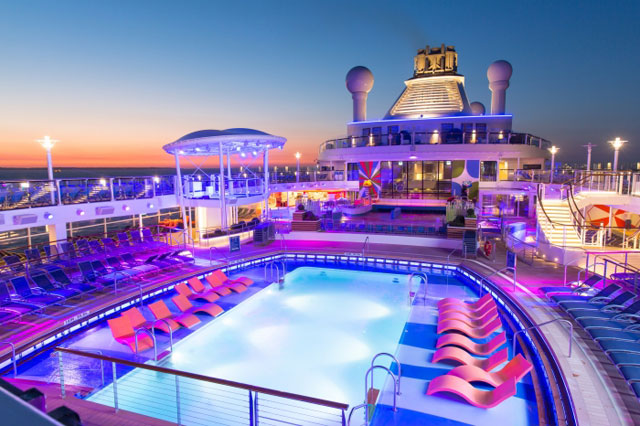 This monumental ship is the 2nd largest ship in the world reaching an amazing 168,666 GT carrying 4,180 passengers, while that’s a magnificent feature in itself the entertainment is beyond belief. Ever thought of skydiving while on a ship? Well the Ripcord, a skydiving simulator, provides just that. The North Star is a jewel-shaped glass capsule that stands 300 feet above sea level for an unparalleled 360-degree view.

The highlight of this ship is the Seaplex, the largest indoor sports, and entertainment system at sea featuring sports such as bumper cars, roller skating, a circus school, and many other activities assuring you the time of your life. The entertainment doesn’t stop there with some of the rooms having virtual balconies (floor-to-ceiling ultra-HD screens with real-time views of the ocean and destinations visited). The art itself is entertaining to see, a perfect example being GiGi, a two-deck giraffe wearing a floaty!

The allure of the Seas

This king-sized Queen of cruise ships weighs 225,282 GT and carries a maximum of 6,450 passengers. It has a nearly identical sister, Oasis of the Seas, but we chose the Allure for being more modern and carrying more passengers than its fleetmate. This ship is superior to most other ships in almost every way. Starting with entertainment, the kid’s program is arguably the biggest and best at sea. Physical activities include simulated surfing, an ice rink, wall climbing, and an outdoor high diving aqua-theatre. This ship so so vast, they decided to break it up to 7 neighborhoods. These neighborhoods include an entertainment center, a shopping area the length of a football field, a park filled with up to 12,000 plants including trees, restaurants, a sea spa, a whole deck dedicated to the kids, and a sports area.

These neighborhoods are so diverse it’s made to feel like 7 different ships linked to one. The spacious neighborhoods mean that there’s something for everyone, families who enjoy activities together, active couples wanting a kids-free zone. Allure cabins are enforced with incredibly fast wifi. You can even make your own personal stuffed animal. Allure truly is the Queen of the seas!

What Is The Safest Type Of Boat?