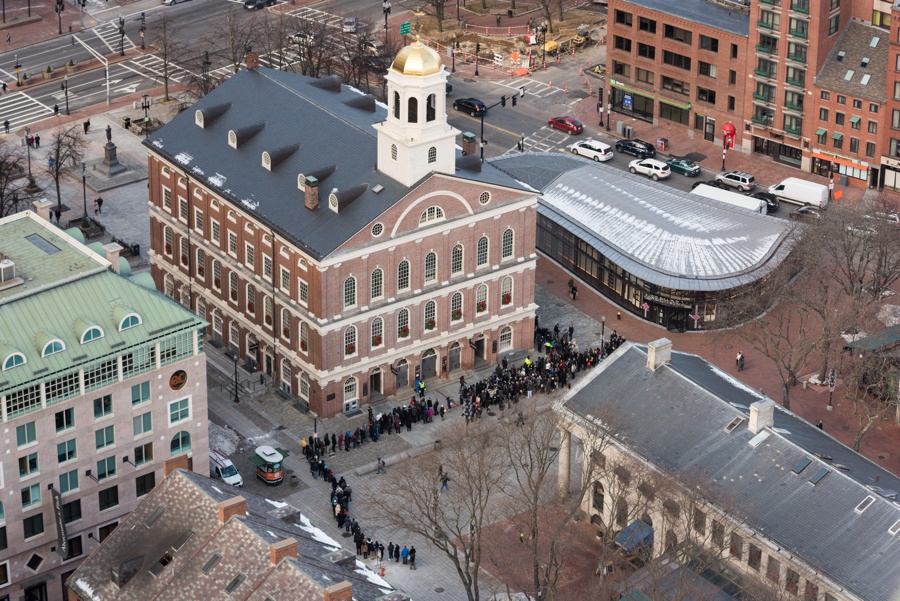 One of the wealthiest Boston merchants Peter Faneuil proposed to mark his success by building a central food market in his hometown in 1742. The Hall included an open market and a meeting space suitable for town gatherings. The hall, named for Faneuil, was built on land gained by the filling of the small cove near the ancient and dilapidated town dock. In 1761, Faneuil Hall burned. Two years later it was rebuilt–this time financed by a public lottery. Faneuil Hall soon became the focus of revolutionary activity in Boston. At times protest meetings held at the Hall spilled over into incidents of violence on the streets. Under the leadership of James Otis, Samuel Adams, Dr. Joseph Warren and other “Sons of Liberty,” debates led to opposition to the Sugar Tax of 1764, the Stamp Act of 1765, and other British political maneuvers. In December of 1773 sessions took place here concerning a newly arrived consignment of tea and the tax to be paid on it. Faneuil Hall soon became know as America’s “Cradle of Liberty.”

The meeting room at Faneuil Hall still serves the people of Boston as a public meeting place as well. National issues continue to be discussed from its stage, but more frequently, the hall is the site of debates on community issues, high school graduations, and naturalization ceremonies for new Americans. The third floor contains the museum and armory of the Ancient and Honorable Artillery Company of Massachusetts. The Company, founded in 1638 for the defense of the colony, has occupied space in Faneuil Hall since 1746.

Don’t forget to visit the Faneuil Hall Marketplace to do some shopping.

Museum of the City of New York